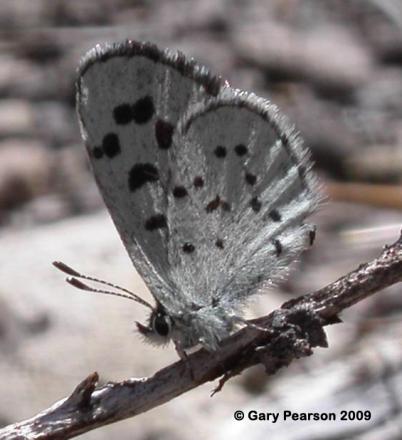 Discovered in 1991, Leona’s little blue is a tiny butterfly that is native only to Klamath County, Oregon. The geographic range of this threatened butterfly is only a 6 square mile area, and it depends upon clearings in lodgepole pine forests for its habitat. The buckwheat that grows in the ash and volcanic pumice filled soil of these clearings is crucial for these butterflies, both as the host plant of the larvae and to provide nectar for the adults. Adult males of this species have bluish wings with black spots, and females are brownish-black.

Because the population of Leona’s little blue is so small, with only 1,000-2,000 individuals, and because its habitat needs are so specific, the species is in great danger of going extinct. Specific threats to Philotiella leona include encroachment of pines into the open clearings they live in, logging, irresponsible fire control practices, and insecticide and herbicide use. Unfortunately, most of this butterfly’s habitat rests on private timberland, and a possible change in land ownership could further endanger it, and perhaps even drive it to extinction. In 2010, a petition for listing under the endangered species act, headed in part by Oregon Wild, was submitted to the US Fish and Wildlife Service. The 12-month status review, published on June 23, 2015, concluded that a listing for the species was not warranted. Further action must be taken not only for the survival of this minute butterfly, but also the protection of the ecosystem it calls home.