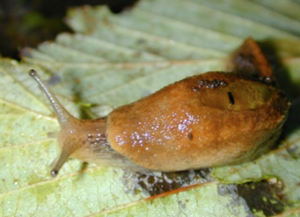 Hemphillia malonei is one of several species of jumping slug that inhabit the Pacific Northwest. This peculiar gastropod is endemic to the Columbia Gorge and Mount Hood areas in Washington and Oregon (meaning those are the only places on earth that it can be found). Malone jumping slugs are often difficult to spot, as they are small, and usually hide on the undersides of hardwood bark on the forest floor. Slugs play an important role in ecosystems as recyclers of organic matter, consuming mostly decomposing and living foliage. One of the most interesting characteristics of this slug is its defense mechanism. When it encounters a predator such as a snail, beetle or salamander, it coils up and straightens out quickly, flopping around and enabling itself to fall off of wherever it was sitting. Not only does this hide the slug from view, it also breaks its slime trail making it impossible for predators to tell where it went.

The Malone jumping slug requires forest habitat to survive. Mature, mixed hardwood and conifer forests at low elevations in the Mount Hood National Forest are the ideal habitat for this slug. Since it has such a small geographic range, habitat destruction can have a particularly intense effect on it, especially because its dispersal ability is very limited. Pacific Northwest forests are thought to host an incredible diversity of invertebrate life, but it went relatively unknown until the passage of the Northwest Forest Plan and the research surrounding it. In order to protect the Malone jumping slug, and other sensitive mollusks and insects like it, it’s crucial that the forest ecosystems they rely on, and that in turn rely on them to function properly, are kept as untouched and pristine as possible.

A dromedary jumping slug in British Columbia seen in action: