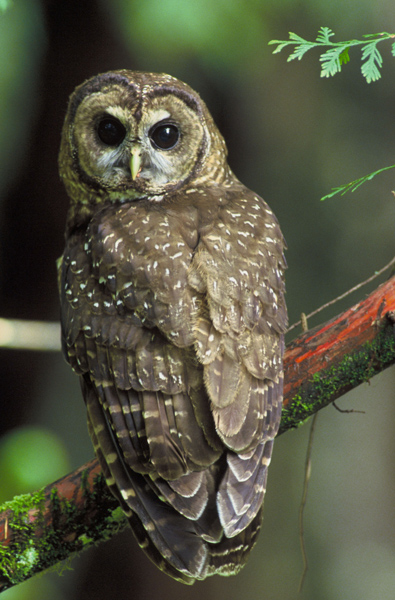 With a 1990 appearance on the cover of Time magazine, the spotted owl is one of the best known species in Oregon, and remains the iconic poster child of old-growth forest protection.

Medium in size, the Strix occidentalis is dark brown with white spots that give the owl its name. Dense, mature coniferous forests are this nocturnal, woodland owl's habitat of choice.

In Oregon, spotted owls typically occupy Douglas-firs, grand firs, ponderosa pines and incense cedars. The flying squirrels, wood rats and red tree voles that share the forest with the spotted owl make up the bulk of its diet, along other small mammals, birds and reptiles. Spotted owls are known to be relatively tame birds, often unfazed by the presence of humans.

Why Does the Owl Need Our Help?

Although the spotted owl has been protected under the Endangered Species Act since 1990, its fight for ecological stability is ongoing. Persistent logging in Western Oregon is steadily destroying the spotted owl's habitat, causing the species' numbers to decline. Although old-growth logging has slowed, due in part to President Clinton's Northwest Forest Plan, the population continues to dwindle.

Another cause for concern is the increased competition for habitat and prey the spotted owl faces from the barred owl. The more aggressive barred owl is not native to the Pacific Northwest — its original range was from Florida north to Maine, but by the 1990s barred owls started to take over spotted owl nest sites in Washington and Oregon.

This increased competition, in conjunction with habitat loss due to logging, has resulted in some populations of spotted owls dropping to half of what they were in the 1980s, when the fight to save the bird began.

Oregon Wild's fight for designated Wilderness areas and roadless areas devoid of logging is necessary for this bird's survival.