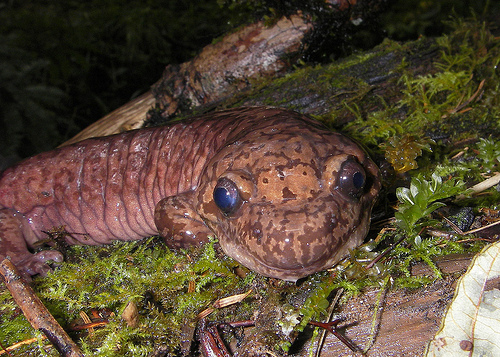 The Coastal Giant Salamander has the broadest range of the genus and can be found in the cool mountain streams of the Washington and Oregon Cascades, the coastal ranges of Oregon and California, as well as in British Columbia. Reaching thirteen inches in length, these semi-aquatic creatures are brown and have external gills as juveniles, and are mottled brown and black as adults. Salamanders start their life entirely aquatic, with gills that allow them to breathe underwater. At the end of their larval period they either transform into terrestrial salamanders or remain in their fully aquatic natal form and keep their gills. Most of the adult terrestrial salamander’s life is spent undercover beneath logs, bark or stones, either in the streambed or on land, though they will roam about freely after heavy rains. Pacific giant salamanders feed mostly on small aquatic invertebrates and small vertebrates such as smaller salamanders or fish hatchlings.

Being amphibians, giant salamanders are highly susceptible to poor water quality and environmental toxins. Logging and other human activities can lead to siltation and higher temperatures of stream waters, making important salamander habitat much less desirable. Amphibians like the pacific giant salamanders are considered indicators for the declining health of waterways. They are particularly sensitive to changes in water quality and are often the first to be affected by them. Healthy waterways and roadless areas free of logging are important for supporting the secure populations of pacific giant salamanders that currently exist in Oregon.