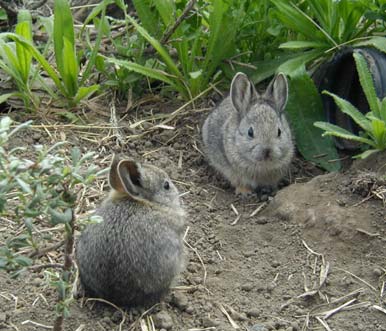 This charismatic little rabbit measures just 12 inches from nose to tail and doesn’t weigh more than a pound at full maturity. Because of its small size, it is easy prey for many predators, and requires plenty of protective areas in which to hide. It finds this refuge in the form of the sagebrush plant or in the burrows that it makes in deep, soft soil. Much like the sage grouse, the pygmy rabbit relies on sagebrush not only for protection but for more than 90% of its diet. While pygmy rabbits can live outside of sagebrush habitats, they do not thrive, and there are no published reports of pygmy rabbit burrows outside of sagebrush country. The pygmy rabbit can be distinguished from other leporids (rabbits and hares) by the relatively short length of its ears, it’s all over gray color (most others have white tails), and most of all, its small size.

Throughout its range in Montana, Idaho, Wyoming, Washington, Utah, Nevada, California and Oregon, the pygmy rabbit requires large expanses of uninterrupted shrub-steppe habitat. Unfortunately, right now the pygmy rabbit faces many threats. Conversion of indispensable sagebrush meadows for agriculture and development for oil and natural gas extraction are depleting an already fragile ecosystem, without which pygmy rabbit populations are sure to suffer. The distinct Columbia Basin population in Washington State was considered extinct in the wild, until recent captive breeding efforts by the Oregon Zoo led to a small comeback of wild rabbits. To ensure that Oregon’s, and other states’, pygmy rabbit populations don’t meet the same fate, it is necessary to preserve large uninterrupted swathes of roadless and undeveloped rabbit habitat, and keep them free of damaging human activities.