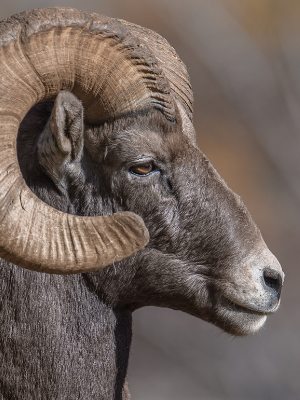 Rocky Mountain bighorn sheep, the largest wild sheep in North America are one of two subspecies of wild sheep native to our beautiful state of Oregon. They can be found in habitats with large expanses of open grassland, canyons, rocky outcrops and cliffs. Unfortunately, populations of Rocky Mountain bighorn sheep were extirpated from Oregon in the 1800s due to unregulated hunting, habitat loss and destruction, and diseases contracted from domestic animals. However, there is hope for the species’ recovery! Current populations exist in Oregon thanks to reintroduction efforts led by the Oregon Department of Fish and Wildlife that started in the early 1950s. There are now about 800 Rocky Mountain bighorn sheep in northeast Oregon, focused around the soaring Wallowa Mountains and the steep canyons of the Snake river.

As herbivores, bighorn sheep browse on plants such as grasses, clover, sedges, and sage, and help to disperse seeds and regulate vegetation overgrowth and succession. These sheep are also an important food source for predators like coyotes, golden eagles, mountain lions, and bears.

Although populations have rebounded, threats remain including encounters with vehicles, loss of habitat, contact with domestic sheep and goats, pneumonia bacteria present in herds, and predation from animals such as cougars. That’s why conservation actions like reintroducing bighorns to suitable habitat and preventing contact with domestic sheep and goats should be taken to further support this magnificent animal’s recovery in the state.