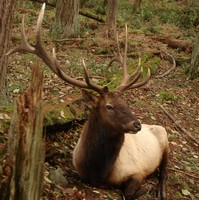 The Roosevelt Elk, named for Theodore Roosevelt, is the largest of the four remaining North American elk subspecies.  Males (bulls) average 875 pounds, but bulls weighing nearly 1300 pounds have been found in Alaska.  Females (cows) average 700 pounds. These elk also have the largest antlers of all elk species, reaching lengths of up to four feet with a distinctive three-point tip, or crown and the end. Males grow their antlers between April and August every year. The Roosevelt Elk is also much darker than other elk species, often with a dark brown or even black neck and a tan body. Female elk typically give birth to one calf at a time, and calves are able to stand and feed within an hour of being born.

The Roosevelt Elk lives primarily on the western slopes of the Coastal and Cascade Ranges from northern California up to southern British Columbia.  The largest unmanaged herd of Roosevelt Elk is in Olympic National Park in Washington State and consists of nearly 5,000 elk.  In 1928 they were introduced to the Afognak and Raspberry islands off the coast of Alaska and are thriving there.  Typically they enjoy open lands where they can walk freely and graze on grasses, however they often prefer a mix of old growth stands and edge environments.  This provides cover from the weather and predators.

These elk are seasonally migratory, spending the summer months in the mountains and on snow fields and moving to lower elevations in the winter to avoid winter storms and find food.  Bull Roosevelt Elk are known to live up to sixteen years in the wild, with some cows living up to twenty-one years old.

Elk play an important part in the life cycle of the forest by clearing understory vegetation which makes way for other plant and animal species.  Their natural predators include the gray wolf (which is making a comeback in northeastern Oregon but have been extirpated in western Oregon) and mountain lions, which usually thin herds by taking old and weak elk.  It is estimated that nearly 10 million elk lived in North America prior to 1500 and were reduced to less than 100,000 by 1907.  In fact the first name suggested for what is now Olympic National Park was Elk National Park, as it was intended to be a reserve for dwindling elk herds.

Currently habitat loss and fragmentation due to logging and road construction threaten these unique elk.  Elk habitat is also being reduced by forest management practices that are keeping sunlight from reaching the forest floor and providing the vegetation they eat – such as clearcutting and replanting dense tree plantations.  Creative forest management practices are needed to provide breaks in the canopy while maintaining old growth stands that will allow for vegetation that is essential to elk and many other species.