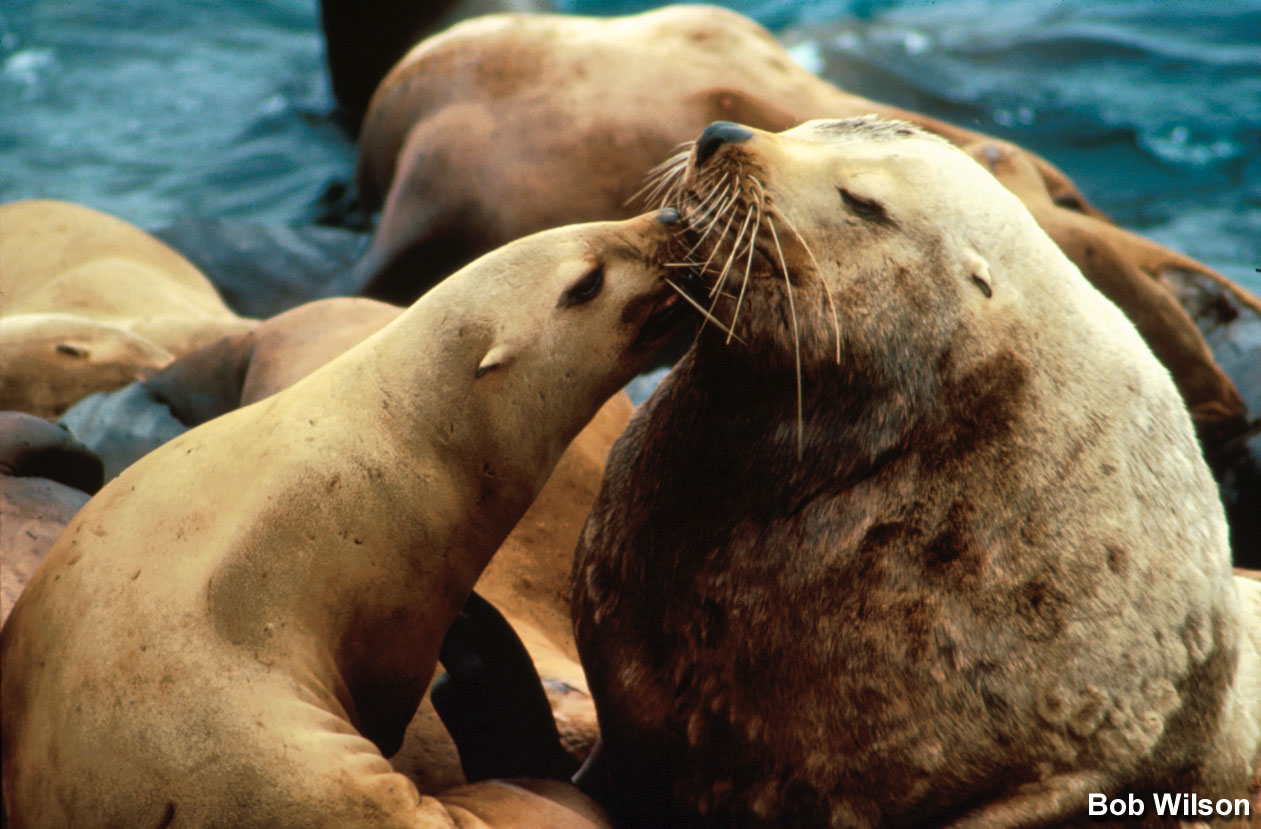 Steller sea lions, named for German botanist Georg Wilhelm Steller, are one of the largest members of the pinniped family which includes seals, sea lions and walruses. Females can grow up to 9 feet in length and weigh up to 1,000 pounds while males have been known to weigh in at a whopping 2,500 pounds and reach 12 feet from nose to tail. They are sometimes confused with California sea lions, but Stellers are much larger and have a lighter coat coloration. Males also lack the sagittal crest, or large bump on the top of the head, that distinguishes male California sea lions from their female counterparts. The fur of the Steller sea lion ranges in color from light tan to reddish brown, and they have a very broad, blunt head. The global Steller sea lion population is divided into an eastern and western stock at 144°W longitude, roughly the middle of the Gulf of Alaska.

Like most large pinnipeds, Steller sea lions are polygynous, meaning each male mates with multiple females. They differ, however, in that females are free to move from one male’s harem to another; females are not coerced by males to remain in their rookery. Once a pup is born, females will leave the nest to forage offshore for fish such as cod, herring, mackerel and salmon, and squids and octopus.

The Steller sea lion has recently caused a fair amount of controversy in Oregon. In the last few years, Steller sea lions have been leaving their coastal waters and entering the Columbia River. The Bonneville Dam is the first dam that salmon encounter on their spawning journey, and Steller sea lions have learned that waiting at the dam is a sure way to get a meal. This has concerned fisheries managers that work to protect the vulnerable salmon populations, but there are limited solutions because western Steller sea lions are also an endangered species.

Recent decline in Steller sea lion numbers have alarmed experts, and the cause is not well understood. Western populations of the pinnipeds (living in the Aleutian Islands and Alaska) suffered an 80% decline between the 1970s and early 2000s. One possible cause is the interaction between sea lions and fishing gear such as drift nets, longlines and trawling lines that usually results in serious injury or drowning from entanglement. Steller sea lions are also indirectly affected by human fishing practices because of increased competition for food sources that are a valuable fisheries resource. Eastern populations in British Columbia, Washington, Oregon and California were also declining when originally listed in 1990. Since that time, however, the eastern stock has increased at a rate of 4.25% per year, leading to their removal from the endangered species list in 2013. However, pressures from commercial fishing persist and we must stay vigilant to ensure a strong and healthy population is maintained into the future. Learn about Oregon Wild's work to protect the integrity of Oregon's waters and riparian habitat that salmon and Steller sea lions depend on.