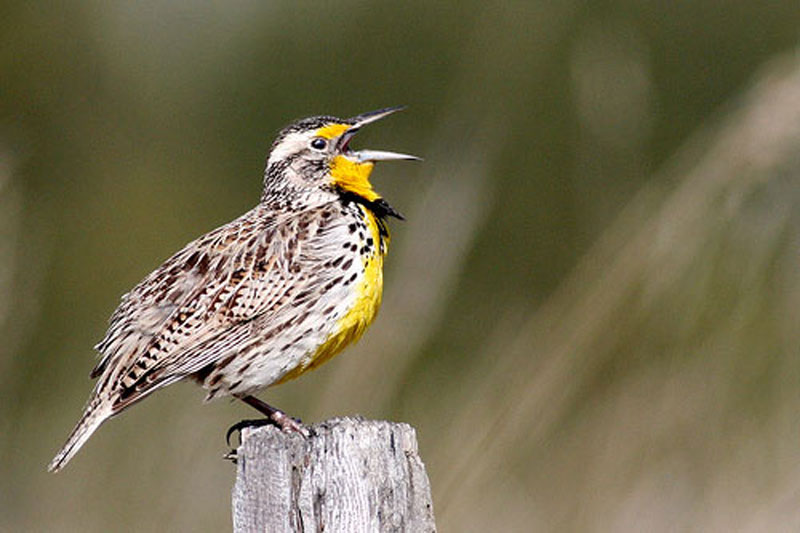 Oregon’s state bird can be found perched on fence posts or atop shrubs in open grassy plains, filling the air with its flute-like song. The western meadowlark is about the size of a robin with a solid yellow breast and distinctive black collar. It has a long pointed bill that it pokes into the soil to search for insects during the summer and seeds during the winter. This ground-nesting bird is polygynous—males typically mate with at least two females per breeding season. Females make dome-shaped nests out of grass in small depressions on the ground, and they incubate their eggs there for about two weeks. After another two weeks, the newly hatched meadowlarks are ready to leave the nest and, while they can’t fly, they can run rather well and begin to forage for themselves. Western meadowlarks inhabit nearly 2/3 of the U.S., but in Oregon are most commonly found in the eastern half of the state.

The western meadowlark is a critical sensitive species in Oregon, meaning that if immediate action is not taken to preserve this bird and its habitat, a listing as threatened or endangered may be necessary. In eastern Oregon, much of the sagebrush and grassland habitat needed by the western meadowlark still exists, and despite some conversion of natural prairies into grazing pastures, the bird has been able to adapt and its numbers are relatively stable. West of the Cascades, however, much of the open grassy plain in the Willamette, Umpqua and Rogue valleys has been destroyed for rural and urban development and agriculture. The western meadowlark and other bird species have suffered as a result of this habitat alteration. Increased human use of nesting areas has also led to smashed and destroyed nests. Preserving what habitat these birds have left is crucial for ensuring its conservation.