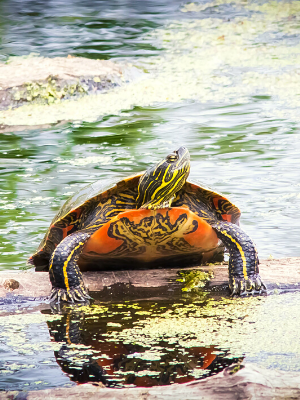 With its distinctive yellow striped head and legs, red rimmed shell and beautifully patterned plastron (under shell), the Western painted turtle cuts a striking figure. Whether sunning itself on a half submerged log, or mud-caked bank, or swimming amongst floating vegetation or below the water’s surface, it is an exciting find for any onlooker. Although there are four species of painted turtles in North America, this is the only one native to the Pacific Northwest. In Oregon, they can be found in the Blue Mountains, Coast Range, Columbia Plateau, East and West Cascades, and Willamette Valley eco-regions.

Western painted turtles prefer the shallow and slow moving waters that wetlands, sloughs and freshwater ponds provide and need habitats with a muddy substrate and an abundance of aquatic plants. They can often be found eating aquatic vegetation, which encompass the majority of their diet. However, they also forage for other snacks like insects, crayfish, earthworms, frogs, larvae, small fish and even carrion! Female turtles can grow up to 10 inches long, while the smaller males can grow up to 6 inches. Between March and June female turtles will dig nesting sites near water and lay 1-23 eggs before carefully covering the opening with foliage, twigs and other debris. Ten weeks later baby hatchlings, the size of a quarter, will emerge and make their way into the water.

The species faces many threats to survival, including habitat loss from fragmentation, and the encroachment of invasive aquatic plants. Other factors include road mortality, predation by bullfrogs, fish, and raccoons, competition with invasive turtles, and human interference. If the Recovering America's Wildlife Act passes, the Western painted turtle would receive enough funding to recover habitat and population numbers in order to keep the species off the endangered species list!