Below the briny cold surface of Oregon’s rocky coast, kelp sway to the tide. Together, they form a lush underwater forest, complete with a dense canopy and carpeted understory. Like our forests on land, kelp forests provide habitat -- food and shelter -- for a wealth of plants and animals; and support the livelihood of numerous Oregonians.

Globally, kelp health is poor, as 38% of the world's kelp forests have been in decline over the past five decades. At home, the story is not different. U.S. Department of Agriculture survey maps show kelp thrived off Oregon’s coast for generations. 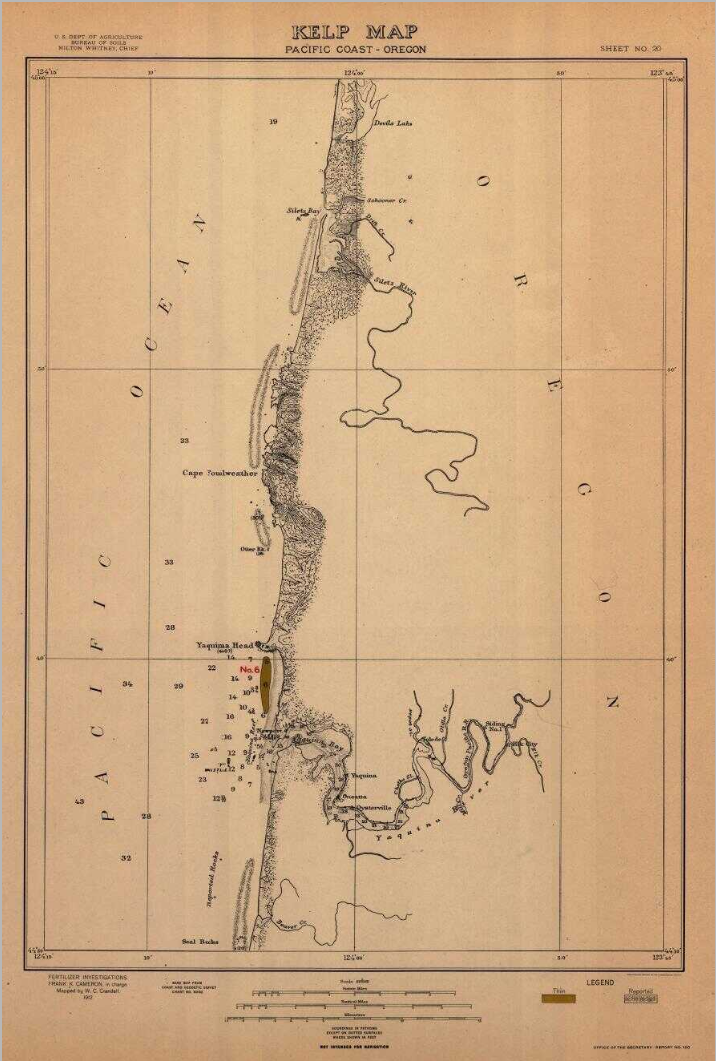 One in the set of 1912 maps illustrating Oregon kelp beds. This map depicts kelp located between Lincoln City to Newport on the central Oregon coast.
See the rest.

But now, kelp forests occupy less than 1% of the nearshore. Warmer water temperatures combined with stressors such as unchecked grazing on kelp by Pacific purple sea urchins and water pollution from human and animal waste put the survival of this unique ecosystem at risk. Luckily, local organizations, including Portland Audubon and the Elakha Alliance, and state strategies like the Oregon Department of Fish and Wildlife’s (ODFW) Nearshore Strategy, are working to protect and restore kelp. 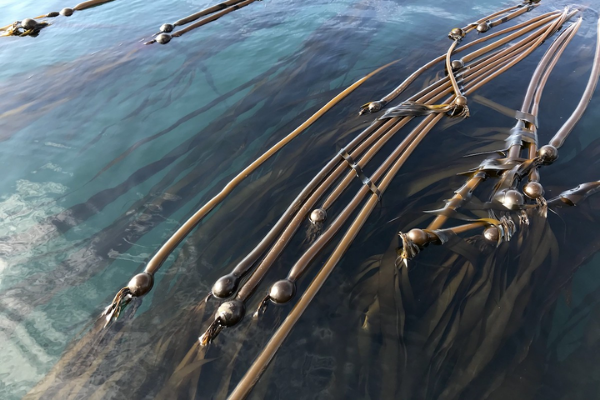 Kelp is an aquatic alga found worldwide. Oregon’s rocky nearshore reefs play landlord to primarily brown macroalgae. Our state’s predominant species, Bull kelp Nereocystis luetkeana, dwells in the subtidal zone up to 130 or so feet below the surface. 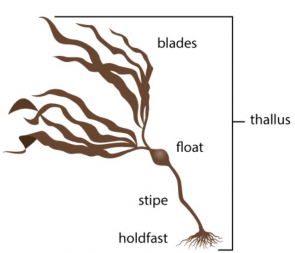 Brown macroalgae have four essential parts: the stipe, float, a handful of blades, and holdfast system. For Bull kelp, their stipe (stem) supports one gas-filled bulb (float) or pneumatocyst. This float is crowned by thirty to sixty-something leafy blades. Like a tethered balloon, the float keeps its stipe upright and pushes the Bull kelps’ more than thirteen-foot-long blades closer to the sun, absorbing life-giving nutrients through photosynthesis. At the stipe’s opposite end, a collection of holdfasts grips the uneven ground and prevents the kelp from drifting away.

Kelp are ecosystem engineers, providing an interconnected place for organisms of all stripes. “They are the coral reefs of colder waters,” says Dr. Bayden Russell of the University of Adelaide Environment Institute and Senior Lecturer in the School of Earth and Environmental Sciences.

And similar to coral reefs, if kelp disappears so do the plants and animals that depend upon it.

On beaches, tangled mats of dead kelp shelter crabs and insects particularly the sand flea. While these tiny creatures munch decaying kelp, they make a quick meal for shorebirds such as the threatened Western Snowy Plover. Likewise, dead kelp that has not landed on beaches becomes detritus, dissolved organic matter supplying nutrients wherever it falls. 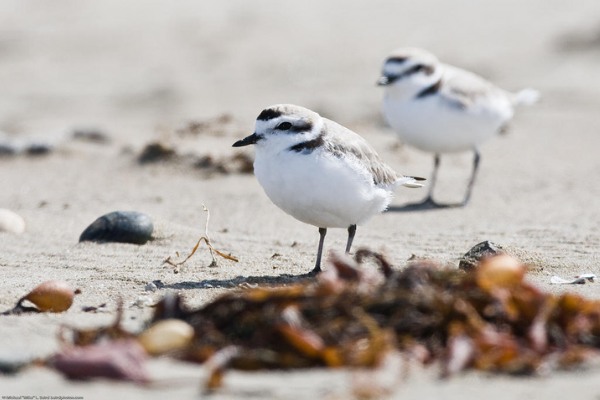 At the water's surface and inside the kelp canopy, phytoplankton hangs out. These microscopic plants form the bedrock of the marine food chain. Zooplankton communities (tiny animals), small schooling fish, and crustaceans such as snails feast on the phytoplankton. The kelp canopy also serves as a nursery, where egg sacs adhere to blades and stipes.

What’s more, juvenile fish, including Lingcod, a variety of Rockfish, Harbor seals, and Gray whales, hunt, rest, and seek shelter between the kelp canopy and understory. Gray whales have a special way of feeding here. Swimming sideways along the ground, they suction sediment into their mouths and siphon it through large baleen plates with a push of their massive tongue, trapping tiny amphipods hiding in the sediment. Along with Gray whales, Oregon’s diving sea birds, notably the Tufted Puffin, forage in this section of kelp “flying” through the water, pursuing prey.

Near the kelp holdfasts, sea stars, abalone, sponges, anemone, and urchins make camp. Unfortunately for kelp, Pacific purple urchin populations erupted. Urchins munch on kelp holdfasts and unhindered can leave behind a barren of dead and missing kelp. Specific stressors allowed for urchin populations to take off. Sea otters Enhydra lutris once fed upon these invertebrates; however, sea otters are now extinct in Oregon waters. 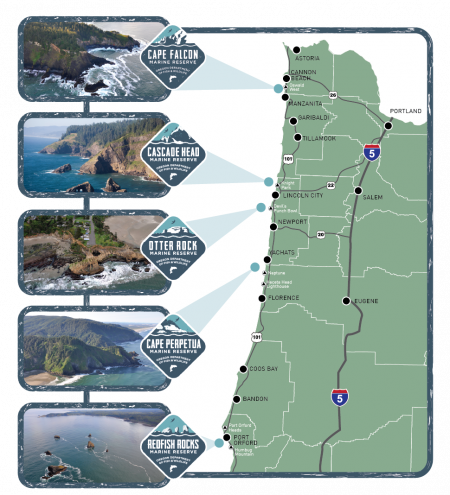 Worldwide, these areas bolster biodiversity, and as organisms are free to breed and feed without undo pressure, correspondingly, a stable and profitable ecosystem is produced.

Kelp is helpful to marine organisms and delivers benefits or ecosystem services to humans.

Two, kelp have the potential to keep carbon dioxide from the atmosphere. During photosynthesis, kelp absorbs carbon dioxide, which is then stored inside the algae body. When kelp dies, portions disintegrate and eventually sink to the bottom of the ocean. Early estimates suggest that 173 million metric tons of carbon could be stored each year, and even if a fraction of carbon is sequestered this way, it’s “enough to be globally relevant.” 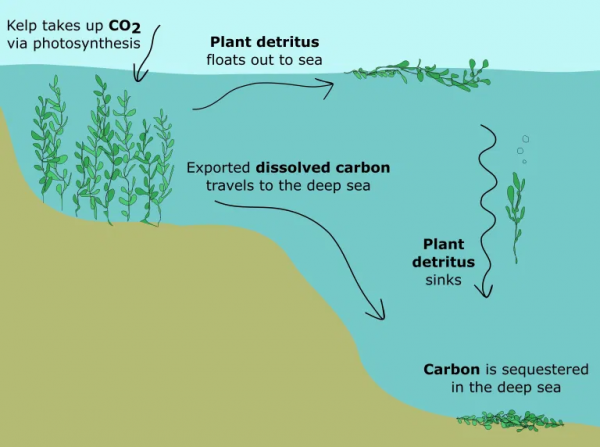 Reducing carbon dioxide is a key factor in getting a handle on global warming.  But, more data needs collecting before scientists confirm kelp carbon sequestration provides a definitive benefit. In the meantime, start-ups are moving forward with kelp “blue carbon” sequestration programs. Listen below to the story of one such start-up, Running Tide Technologies.

Three, kelp could lessen localized ocean acidification. Ocean acidification results from an uptick of carbon dioxide dissolved in the ocean, generally from the burning of fossil fuels -- oil, gas, and coal. Increasing carbon dioxide makes the water more acidic. Canopy-forming kelp, say Bull kelp, has been shown to reduce nearby ocean acidity and generate a space favoring calcium production known as calcification. The process is life-sustaining for plankton and shellfish whose structures are made of calcium carbonate which dissolves in acidic water.

A mollusk shell dissolves under acidic conditions. The shell almost completely dissolves after 45 days when placed in seawater with pH and carbonate levels projected by models for the year 2100. David Liittschwager/National Geographic Creative.

On top of this, bull kelp has a natural ability to fully mature into an adult plant in one year, making the algae among the fastest-growing organisms on the planet. Its super growth speed is a reason why scientists are looking at kelp to ameliorate ocean acidification via aquaculture, the farming of aquatic species such as fish, crustaceans, mollusks, and seaweed.

Four, when kelp is prosperous marine ecosystems increase in abundance, giving back to ocean-driven local economies. Healthy kelp yields healthy fish and invertebrates stocks benefiting the commercial fishing industries as well as tourism. Worldwide, coastal and marine tourism is projected to be the largest value-adding segment of the ocean economy by 2030. More importantly, outdoor recreation is a major contributor to Oregon’s economy. Our coast draws people from all over the world for food, sightseeing, birding, hiking, biking, SCUBA, boating, kayaking, surfing, fishing, and more. The 2019 Oregon Outdoor Recreation Economic Impact Study determined that both locals and visitors to the state brought in $5.61 billion for the coastal region, in turn supporting 47,000 full and part-time area jobs.

THE FUTURE OF OREGON’S KELP

The future of Oregon’s kelp connects directly to our action or inaction on the big issues of managing shared resources, pollution, and most significantly, climate change. Current research indicates that Bull kelp, Oregon’s most populous species of kelp, may be particularly sensitive to warming waters. But the risks go far beyond the oceans, touching nearly every aspect of society and the environment. The Intergovernmental Panel on Climate Change says, “Climate-related risks to health, livelihoods, food security, water supply, human security, and economic growth are projected to increase with global warming.” This statement is poignant, as historic record temperatures occurred in the Pacific Northwest during July 2021, killing hundreds of people and millions of ocean-based animals as well as damaging salmon stocks. 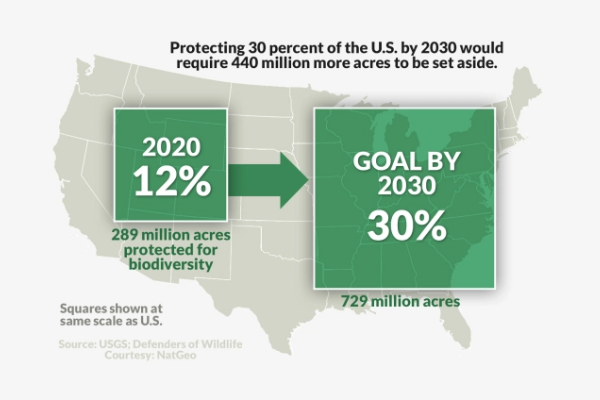 The Biden Administration’s “American the Beautiful” initiative can address red flags like those mentioned above. “America the Beautiful,” so-called 30x30, directs the preservation of 30% of the United State’s land and ocean by 2030.  The Executive Order calls out coastal communities as having an “essential  role  to  play  in  mitigating  climate  change  and strengthening  resilience by  protecting  and  restoring  coastal  ecosystems,  such  as  wetlands, seagrasses,  coral  and  oyster  reefs,  and  mangrove  and  kelp  forests,  to  protect  vulnerable coastlines,  sequester  carbon,  and  support  biodiversity  and  fisheries.”

At home, procedural roadmaps and boots-on-the-ground restoration of kelp, urchin harvesting, and species reintroduction are a handful of methods explored in the service of sustaining Oregon kelp.

The OAH Action Plan, “identifies ways that our government and individual Oregonians can make a difference to slow these impacts and adapt to the changes we are already seeing.” Navigate the topic of ocean acidification in Oregon waters with this story map by Surfrider Foundation.

Lastly, ODFW provides a brief overview and historic look at The Oregon Nearshore Strategy, which “is intended to facilitate action on priority nearshore issues and areas that are not specifically addressed by existing processes. 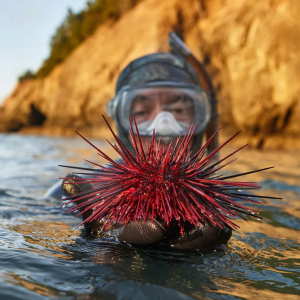 Immediate action, though, is heralded by The Oregon Kelp Alliance (ORKA) and Reef Check Oregon, who are at the forefront of the state’s kelp restoration and urchin harvesting. April 2021 witnessed Reef Check Oregon and ORKA researchers launch a restoration project at Nellies Cove in Port Orford. Their experiment “involves surveys to determine the extent of kelp loss and urchin population increases. Sea urchins will be removed from the sites where they’ve overgrazed on kelp so that kelp forests can begin to recover.” ORKA too works with Oregon Sea Farms, piloting an urchin ranching program cultivating purple urchins for human consumption. Purple urchins removed from kelp forest barrens are often withered inside due to them eating all of the available healthy kelp.

Details on the restoration are found throughout OKRA’s interactive site produced by Human Wild. You can also watch highlights from project dives recorded on Instagram LIVE by the Redfish Rocks Community Team, or listen to Tom Calvanese, manager of the Port Orford Field Station for Oregon State University and Coordinator of ORKA discuss the project on air during a September 2021 interview.

Another, and objectively adorable, approach to sustaining Oregon kelp is reintroducing sea otters. Sea otters are a keystone species as they manage their kelp forest environment by eating urchins. The Elakha Alliance has a three-prong restoration strategy potentially reintroducing sea otters to the Oregon coast. Their strategy incorporates a feasibility study, consensus building, and, if deemed appropriate, performing restoration at select locations. The draft feasibility study can be read here.

Dive deeper into the subject, and discover how Oregon’s sea otters became extinct, their cultural significance, and reintroduction efforts with Oregon Wild’s podcast and multimedia series The Lost Sea Otters of Oregon or by viewing Oregon Wild's 2022 webcast on the state of sea otter recovery in Oregon.

Videos via ODFW; diagram of Bull kelp via wikimedia (https://en.wikipedia.org/wiki/File:Anatomical_diagram_of_kelp.jpg). This project was written and compiled by Kristin Bayans.