The Umatilla National Forest is located in Northeast Oregon and Southeast Washington. The Forest takes its name from the Indian word meaning "water rippling over sand." Explorers Lewis and Clark came past this land in 1805 on their Columbia River Voyage to the Pacific Ocean, and Marcus and Narcissa Whitman passed this way in 1836 to establish a mission at Wailatpu near Walla Walla, Washington. Thousands of emigrants followed the Oregon Trail westward, and many remained in the Blue Mountain Country.

Discovery of gold in Oregon in 1851 initiated the settlement of the North Fork John Day River area. Remnants of that period, when over $10 million in gold and silver were removed, are still visible. Some claims are still being mined today, which can have negative affects on the surrounding environment.

Over 20 percent of the Umatilla National Forest's land is within classified wilderness. The Wenaha-Tucannon, North Fork John Day, and the North Fork Umatilla. The higher ridges are generally narrow with gravelly soils and very steep slopes. Elevations within the Umatilla National Forest Wilderness areas range from 2,000 feet on the Wenaha River to 6,401 feet at Oregon Butte. Rocky Mountain elk, mule deer and whitetail deer inhabit the slopes on the Wenaha Canyon.

The habitat provided by the forest supports one of the largest herds of Rocky Mountain elk found on any national forest in the nation. Blue and ruffed grouse are found near the forest's springs, streams and rivers. Rocky Mountain bighorn sheep can be found in the Wenaha-Tucannon Wilderness area, and are occasionally seen as far south as the Walla Walla River. A small population of California bighorn sheep has been established in the Cottonwood-Cummings Creek area located east of the Wenaha-Tucannon Wilderness. Chinook salmon, steelhead, and rainbow trout are found in the Grande Ronde, Umatilla, Wenaha-Tucannon, Walla Walla and North Fork John Day rivers, and many of their tributaries.

You can hike over 715 miles of trails, pick wild mushrooms or huckleberries, select from more than 20 campgrounds throughout the forest, and float the Grande Ronde or North Fork John Day rivers from April through June. During an average year, stream flows can be too low for floating from July to September. The North Fork John Day River is designated as wild and scenic along with the Wenaha River. Olive Lake, covering 145 acres, is the only natural lake over three acres in size on the Forest. The Oregon Department of Fish and Wildlife and the Forest Service developed Bull Prairie, Jubilee Lake, and Penland Lake. You can cross-country ski many trails or downhill ski at the Bluewood Ski area. 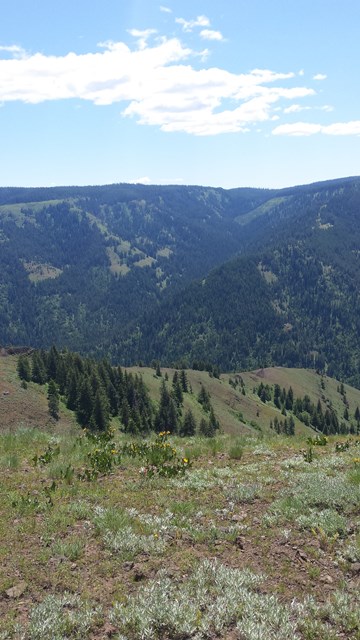 Exploring the Wilderness by Water: Short and Long Swims in Oregon Lakes
Aug 04, 2021